Leadership Team - The First Landing On The Moon.

Leadership Team - The first landing on the Moon. Here's a story used as a training game to explain the significance of a leadership team.

As the landing began Armstrong reported they were "running long." Eagle was 4 seconds further along its descent trajectory than planned and would land miles west of the intended site. 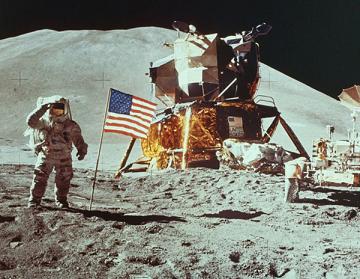 © For picture of Landing on the Moon

Details of the story - Landing on the Moon - used instead of a training game.

The LM (Lunar Module) navigation and guidance computer reported several unusual "program alarms" as it guided the LM's descent, drawing the crew's attention from the scene outside as the descent continued.

Inside NASA's Mission Control Center in Houston, Texas, computer engineer Jack Garman told guidance officer Steve Bales it was safe to continue the descent in spite of the alarms.

When Armstrong returned his attention to the view outside it was apparent the computer was guiding them towards a large crater with rocks scattered around it.

Armstrong took manual control of the lunar module and with Aldrin calling out data from the radar and computer, guided it to a landing at 20:17 UTC on July 20 with about 30 seconds of fuel left.

Michael Collins said,"....All this is possible only through the blood, sweat, and tears of a number of people...All you see is the three of us, but beneath the surface are thousands and thousands of others, and to all of those, I would like to say, 'Thank you very much.'"

(A story used as a training game)

(The story is continued. It is being used here as a training game.)

Leadership Team - Above are excerpts from the story of the first landing on the moon by Neil Armstrong, Edwin Aldrin and Michael Collins. The whole exercise was the result of innumerable plans and teams. Yet it continually required corrections and counsel from different parts of the team until the landing and return back to the Earth.

Leadership Team - The Lesson: The moral of the story (used as a training game) is 'Planning in a team and valuing the counsel of your team members will reach you to your goal'