Word Games with a difference. Play them with friends or in teams. Increase your Vocabulary. Build team spirit. Spin funny stories

Play these Word Games - Antakshari, Rigmarole, Memory, Dud, Atlas - with kids and have fun with vocabulary and spellings.

If you need more information about games other than the ones found on this page please use the Contact Us Page. 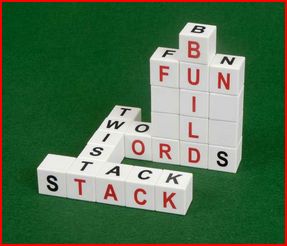 © For the building blocks picture

If you would like to check out other kinds of games to play with kids, go to

Word Games 1 : Antakshari. Antakshari is an Indian word which means the last letter. That is what the game is all about.

How many players are needed? The more the merrier. If there are eight players or more you can divide the group into two teams for the game.

How is it played? The non-team version.

1. Everybody sits in a circle.

Possible rhymes: You could choose any of the nursery rhymes that you remember. If not, you can use one of the following. The first one is an Indian rhyme usually used to find the denner. You can use it if you can get your tongue around the words. The second is an English rhyme.

3. Once the denner has been identified, she starts with any word. (You can decide in the beginning whether you want to use random words in the game or categories of words. The categories could be names of places, things, five-letter or bigger words)

4. You can decide to continue the game clockwise or anti-clockwise.

5. The next person in the circle has to say a word which begins with the last letter of the first word.

6. Like this the game goes on around the circle until the kids decide to stop

7. In the team version, the team thinks up the word. If a team is taking time to think up a word, the other team can use a countdown like the one in the game Name, Place, Animal, Thing.

8. This game can also be used with songs (my children prefer to use peppy songs and have rip-roaring fun with the game). The players should think up songs which begin with the last letter of the previous song.

Play it with any topic. Say you want to practice a set of concepts in Physics like:

Instructions: Give students time, say 1 minute, to encode a concept of their choice. Following are some ways to encode the word 'mass'

The student will choose one such code or make up something entirely their own. Then in turns, each will present their code to the class. The class has to guess the word and then define the concept.

A student can choose any of the concepts that are being practiced in the class.

Word Games 3: Rigmarole: This is another example for 'word games' which is played in group setting. In this game the group spins a story. The more ludicrous the story more the fun.

1. The group sits in a circle and selects a denner using a rhyme (see Antakshari above for sample rhymes)

2. The denner begins to spin the story. The rule is everybody says a couple of sentences at a time and should end their spin with a conjunction.

3. The next person picks up the story and adds her spin. Again the norm is a couple of sentences ending with a conjunction.

4. The aim of the game is to make the story as ludicrous as possible and have fun while spinning the story.

Word Games 4: DUD: Here is another great word game for kids, which you can use to enable them to learn spellings in a fun way. You'll need a group of four to five people to play this. The game is called 'DUD'.

Remember this is a word game and the aim of the game is to escape completing a word and becoming a 'DUD'. If you complete the word three times in a row you are a 'dud'. 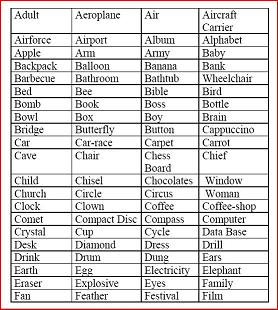 A player begins with a letter (any letter) say 'A'. The next person can add another letter to this say 'l'. The third person starts to guess the number of words that could begin with 'Al', so she might add 't' as her bit.

Suppose the fourth person says 'a', the fifth person has no option but to say 'r' and complete the word 'altar'. As she has completed the word she is penalised by being assigned first 'D' of 'DUD'. As she completes the word 'altar' she also calls out 'D'.

A twist in the game: Suppose the fifth person says 'i' instead of 'r'. The next person in the group might get suspicious that she is trying to bluff her way out of completing the word.

Now the fifth person is obliged to complete the word or accept the first 'D' of the 'Dud'. So if she knows that there is such a word as 'altaic' she can say it and escape being a 'dud', or if she was bluffing then she has to call out 'D'.

After one word is complete the game starts again with another random letter. Whoever gets 'd', 'u' and 'd' first becomes the 'dud' and is out of the game. This way the game goes on and whoever remains finally is the winner.

Generally children have fun by bluffing their way through the game and avoiding the completion of a word. There is a lot of laughter when somebody's bluff is called and she is challenged.

For younger children, have wordcharts displayed in the room, so that they will be encouraged to play. A sample word chart is shown above.

A group of 8-10 kids is an ideal number to play this word game. If you have many more kids in your class you can make two to three teams.

The game begins by the group of kids spelling out the word 'ATLAS', one letter per kid. Whoever gets to say 's' of Atlas begins the game.

This game also doubles as a way to practice the use of the dictionary. The participants are divided into groups of 6 people. Each group is given a dictionary.

The rules of the game:

1. The sequence in which the game will be played is decided in advance, i.e., group 2 follows group 1, which is followed by group 3 and then group 4, until all the groups have taken turns.

2. Each group gets only 30 seconds to answer. The group that does not answer does not get a mark/score. The next group gets the score, if they get the answer.

3. The facilitator initiates the game by a word, say, 'dictionary'

4. The first group in the sequence has to look in the dictionary for the next word, but which begins with 'dj'. Suppose the word is 'djellaba'.

5. The next group has to look up a word which has 'djf' or the next possible third letter after 'dj'

6. The third group looks up a word that is in dictionary sequence upto the 4th letter. The 5th letter is the last in that sequence of dictionary word list. If after the 5th letter there are still groups left, they should start with the next word.

7. The game continues until all the groups in the sequence complete 1 round. Scores are taken stock of at the end of the round. Two to three rounds are played in this manner. The winning group gets an applause.

I played this game for the first time in an English Language Teaching training in Nasik last week. The teachers went overboard over it. I hope you have fun.

Another kind of word game is to use 'cross and dots' grid. Here's a video of this kind of game. Go to the following link on Youtube.

For information on more word games please go to the Contact Us Page.

They can also be used to communicate a concept effectively. They add the 'aha' or 'Eureka' or 'got it' factor to presentations and lectures. They are great tools to use in debriefs of games, to drive home a crucial point.