Treasurehunt - a way to teach children how to draw and set clues for a treasurehunt.

Treasurehunt a learning game that can be used to teach children, 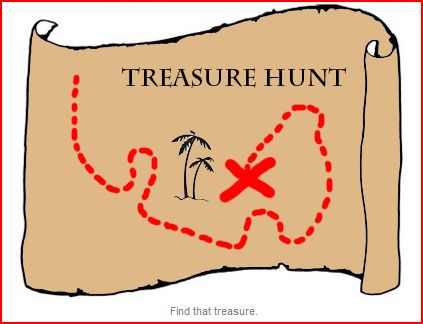 © For the above picture

Before we move on, take a look at some of the drawings my son learnt as a result of playing this learning game. (This page was written when my son was around nine years old.)

I am impressed that my son can draw them on paper and do the same on the computer. Actually he inspired this page.

This first picture shows a room cooler placed on a low table. The arrow mark in the picture is my son's attempt to indicate the positioning of the first clue.

This second picture shows a room cooler placed on the kitchen top. The arrow mark in this picture is meant to indicate the positioning of the second clue.

This third picture shows my laptop placed on the table top. The arrow mark in this picture indicates the positioning of the treasure.


My son learnt this treasurehunt game from watching the cartoon network television channel. Once, when I came home from work, he wanted me to buy him a packet of chips. He had decided to say this differently on this occassion.

He handed me a sheet of paper with the first picture clue. I got to the place quite quickly as the venue for the treasure hunt was my home itself. I found the second picture clue there. Soon I went through the trail of four picture clues. My final destination was a sheet of paper on which my son had popped the question: 'Will you buy me packet of chips?'

I was impressed by the quality of the drawings and the way in which the picture clues were laid out to lead me to the destination. I sent for the packet of chips immediately.

Since then we have played this learning game often, usually initiated by my son.

Teach your child the game and ask her to place the treasure and prepare the trail of picture clues which will lead you/or her friends to find the treasure. Explain to her that the picture should indicate the placement or location of the next picture clue. Tell her she can use stick drawings if she likes.

The trail of clues in this treasurehunt game can be as long as you choose it to be. It can have as many as ten to fifteen picture clues or as few as four of them. It can be an outdoor trail or an indoor one, or a combination of both. It can span a few miles or a few hundred feet. It can even involve intenet surfing.

It is a great game to play which involves creativity, mystery, and the pleasure of deduction that solves the mystery.

They can also be used to communicate a concept effectively. They add the 'aha' or 'Eureka' or 'got it' factor to presentations and lectures. They are great tools to use in debriefs of learning games, to drive home a crucial point.

Fill in the form below and subscribe to the free learning games e-zine.