Team Roles : A Game To Experience The Roles That People Play

Team Roles - The name of the game: 'My role'. A way to explore the roles that people play when working in teams.

Preparation: Make paper hats of different colours. There should be as many hats as there are roles. On each hat the name of the role is written. Some roles people play are: initiator, summarizer, etc.

Get a list of all the roles and their explanations from Roles In Groups. Download the descriptions here.

Ask for as many volunteers as the number of roles that you are exploring. Participants pick up a role of their choice and stand in a circle. They are expected to read their role descriptions and understand their roles. 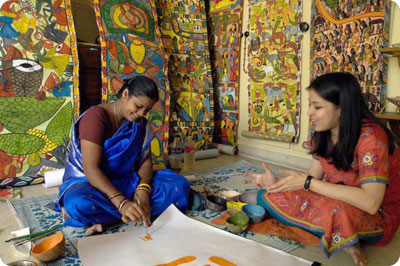 After about five minutes, they are given a controversial topic. They have to discuss this topic in their roles. They have ten minutes to explore their roles while discussing the topic.

In the mean time the rest of the group is sitting around the small group that is discussing the controversial topic - observing the people playing the different roles. At the end of the ten minutes, when the discussion has stopped, the volunteer group will take feedback from the rest of the group on the accuracy of role representation.

In this game of team roles, if the members of the observing group are able to identify the characteristics of the roles that members in the volunteer group are playing, then the members of the volunteer group have portrayed the roles well. In the debrief highlight the learning that seemingly disruptive roles of the joker or the process observer or the questioner, are actually crucial for a performing team.

Team roles and their usefulness are important inferences that can be drawn from this activity. While there is no gainsaying the value of roles like the initiator, summariser, information giver etc., it is not always easy to see the value of the blocking roles. The blocking roles usually help the team to be realistic, data-based, forgiving, assess the real team temperature etc.