Praising People - A Game To Generate Comments To Praise People

He describes it as 'gotcha' in his book 'Whale Done'. Normally we associate the word 'gotcha' as being associated with 'catching beople making a mistake'. Ken has identified it with exactly the opposite sentiment - 'catch them doing right'.

We end up saying inane things or make very general praise comments like 'Hey that was great!' or 'Great work!' etc. These comments do not help at all. People generally brush it aside as being opportunistic or phoney.

Check out the image below to see the results of genuine praise. In this classroom, the demonstrating teacher has just praised her students for an excellent response to a question. It involves the children in a dance step, and they eagerly participate in praising themselves. 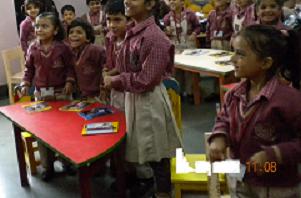 So what do we say and how do we say it. Ken Blanchard provides a format for praising in his book 'One Minute Manager' called 'One Minute Praise'. It has three components:

The difficult part in the above model is to express your feeling. Its easy to do the second and the third part when you have taken the trouble to do the first part authentically.

Here's an activity to develop a resource of positive feelings that your team members can bring up in you.

Form groups of five to eight members each. Ask each group to develop a list of areas that excellent performance is exhibited. Some areas have been listed here as samples.

Use the areas listed in stage 1 as pegs for stage two. In Stage two ask the groups to list down a set of positive feelings, that praiseworthy behaviors - in the above areas - will engender.

It is likely that there will be some repeats in the charts of the different groups. Inspite of that you can have a considerably long list. Type these lists out and the managers and leaders of the company can use them to genuinely praise their people.

Initially, one tends to use the lists mechanically. With a little practice though, praise will start to become specific and authentic.