Leadership styles are styles that you - leaders - use in different situations to get work done by your people. People who have identified their styles have become more reflective about the task, the people incharge of the task and the most suitable style for that situation. You can consider this self-assessment tool a part of the learning games repertoire.

The situational leadership model was put forth by Paul Hersey and Kenneth Blanchard. It became popular as a way of trying to understand the kind of leadership that would lead to the increase productivity without sacrificing either task or people. 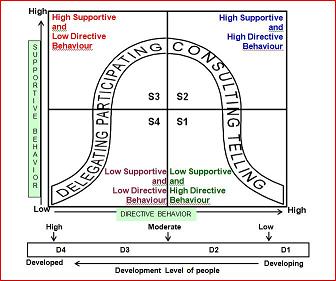 Hersey and Blanchard developed a self-assessment tool to be used in training for trainees to assess the range of their style, and adaptability.

The results from this tool helps trainees to learn about themselves as well as plot their growth path to increase their style range and improve adaptability.

Here's what others who used this service had to say.

My team members were extremely happy about receiving their LEAD survey results. We decided to meet together to review the individual results and revise our individual action plans on what we each wanted to continue to do, stop doing and start doing as leaders. The self assessment has helped our leaders to understand the consequences when their leadership style does not match the readiness level of the follower. We have also developed a series of lunch-n-learn sessions where we can support each other with "real life work situations" in order to develop our ability to more accurately diagnose the followers readiness thus improving our ability to influence as leaders. Without the LEAD self assessment I do not think we could have had the true buy-in and understanding from the leaders into the Situational Model for leading others; it provided just the right amount of feedback to help us begin to implement positive changes in our leaders. It was clear, accurate and easy to understand.

Thank you for providing such a valuable service in such a timely manner !
Michelle Bollinger on 30th June 2009
Director, HR Development
INDIAN RIVER MEDICAL CENTER

Thanks for your report and error analysis - may I request a confirmation as i would like to use these situations as bench marks as I improve my leadership Style
I also would like to thank you for the effort taken to send me the additional info as below.


...you provide with an interpretation - I found very helpful.

This Situational Leadership tool is given below for you to use and assess your own style range and adaptability score. This tool has been included in this site because self-assessment tools provide experience to learn new things about ourselves.

You will receive your leadership profile along with your scores for as low as $10. So go ahead and take advantage of this offer.

This kind of experience leads to decisions that are aimed at improving effectiveness at the workplace.

Mark the response that suits your reaction to a situation. Do not leave any question unattempted, if you would like your profile to be sent to you. Remember the tool can prove a great self learning game. It is a part of a repertoire of learning games for leadership.

Please fill in the personal data at the end of the leadership styles inventory, so that we can send you your profile.

Get your scores and profile by paying $10. Click here to make the payment via Paypal. Then come back and take the test. Your score and profile will be emailed to you within 24 to 48 hours.

If you have not already paid the fee, here's your chance to pay it.

Get your scores and profile by paying $10. Click here to make the payment via Paypal.

Leadership Styles - Customer List and their countries of origin.


Leadership Styles assessment is very useful to understand how people should be matched to situations before making the decision of how to lead them.


Leadership Styles Assessment tools can also be used by heads of organisation to know the leadership potential of it's staff, before making new role placement decisions.

To find out more about learning games contact us