Group norm - recording activities are a variety of training games that trainers use to :

In the context of training games, before we go on to exploring a couple of activities to illustrate group norm - recording , let's revise some basics. (You'll find more details on the recording norm on the group norms page.)

Who exactly is a recorder?

A recorder is a person assigned by a group to 'record' the comments made by all the members of the group verbatim on a flipchart. The role is analogous to an audio recorder.

A good human recorder emulates an audio recorder as far as possible. In case of a longish comment the human recorder is free to ask the speaker to paraphrase. That's about as much freedom a human recorder has. Read on to find out how this is done in this training game.

Before going on to the training game, let's recount the norms of recording?

Refer to the Training Games page for some basic rules on facilitation.

Precede the activity for group norm - recording with an input on this norm. Find the description of the recording norm on the Group Norms page.

Room arrangement for this group norm - recording activity: Make the following arrangement early in the day before the sessions begin. You can also make it at break time, especially if the activity is scheduled after the break. This way you can save time and get on with the game on schedule.

1. In the corner of the room place two tables across each other. Separate them by a 6'x 6' partition. Basically the partition should be wide and high enough to keep 10-12 people on either side of it out of each others sight.

3. Similarly pile both the tables with about ten to fifteen such identical objects. Name the tables 'one' and 'two'

4. On each side of the partition place a whiteboard or a flipchart board with markers.

5. Divide the group into two - group A and group B. Assign Group A to Table 1 and Group B to Table 2.

6. Assign Group B as the Activity Group and Group A as the recording group.

7. State the objective and rules of the game.

8. Group B chooses a volunteer whose task is to tidy the table 2 as she thinks right. But as she does this she also vocalizes every step she takes.

10. The process will continue until Volunteer from Group B has tidily put away all the items on table 2.

11. The group A can assist the recorder to ask appropriate clarifying questions to record the instructions as accurately as possible. The rest of the group cannot ask the questions themselves. The volunteer who is tidying up table 1 is expected to follow the steps as recorded on the flipchart.

12. The group B can help the volunteer who is tidying up table 2 and help her give correct instructions. The rest of the group cannot give instructions themselves.

13. At the end of the game let the groups examine the arrangement on both the tables.

14. There are some cries of remorse some of laughter and a general look of amazement all around.

15. They'll discover that some of the tidying on table 1 has been done exactly as on the table 2. There is also the discovery, that where they recorded the instructions after appropriate clarification the arrangements are the mirror images of each other.

How do you feel? What are you learning?

2. You'll hear a lot of laughter, some sheepish, some mirthful at the state of the arrangement on table 1.

3. Comments like 'happy' will be commonplace. 'Frustrated', 'confused', are also common. 'Triumphant' will be rarer. They will explain they were frustrated because they could not get it exactly right. Most will be 'happy' because they got quite a bit right.

5. Bring their attention to the success that they felt when their recording efforts produced near exact results.

6. In the light of the results of the game, encourage them to adhere to the recording norms in group work to get dramatic results. 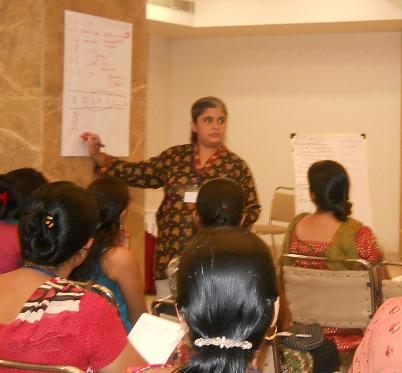 An example of success using the recording norm:

In a team building training the participants were divided into three groups of five. They were named groups A, B and C.

The success criteria in the game are :

Group A used the recording technique to arrive at a consensus. The recorder recorded the individual ranking of all five people for all the items on the survival list in a table format.

The visual created by the table lead them to debate the differences in ranking and come to a consensus on what would be an agreeable ranking to all members of the group.

Of course Group A won the game hands down.

The effect of using the recording technique is obviously phenomenal.

This is a very simple 'group norm - recording' game that is played in pairs. After the input on recording, divide the group into pairs.

Material required for this activity for group norm - recording: one notepaper and a pen for every participant.

The task for the pairs is to communicate to their partners one essential characteristic of a recorder and its significance. The partners record this in the notepaper.

After everyone has shared with their partners, each of the participants read out their recording to the larger group. The partners verify the accuracy of the recording in this activity to demonstrate the group norm - recording.

This is a very simple activity for the group norm - recording to practice listening and the recording skill.

If you would like to know more about the other services offered on this site go to the Contact Us page.

Fill in the form below and subscribe to the free training games e-zine.