Coaching Games - To Learn the Significance and The Method of Coaching

Coaching Games are described on this page. They will illustrate the significance of coaching in Human Resource Development and the method of coaching.

The concept of coaching comes from the sports arena. You've heard of coaches who work with champions to make them better and better.

So, how do you coach a champion or a prospective champion. What do you say to a champion to become better? He is already so good that he is a champion.

The coach plays the role of a mirror. A mirror reflects all the different visible aspects of a person. When you look at yourself in the mirror, the mirror does not judge you, it just shows you different parts of yourself. You look at your reflection and decide on what to set right and what to leave as it is.

Coaching games or situations are ways to help coaches to be mirrors. A coach has to be non-judgmental.

The coach observes the coachee in action and post the performance, describes what he saw. The coach is expected to describe those aspects which were well done.

Pointing out things that are 'well done' is not easy for a human being. Any human being is hard-wired to criticise others. One has to train oneself to 'catch 'em doing right'. Remember, a mirror shows the good and doesn't 'tell' the mistakes. The person looking at the mirror has to see his image critically. The mirror just shows, period.

Here's a game to train oneself to 'catch 'em doing right'.

The people playing this game should know each other relatively well. Each person is given a sheet of paper with the following five statements with blanks.

The condition is that you can't fill in your boss's or supervisor's name in the blank. Evidently, it has to be a colleague's name. One can fill in more than one person's name, but no statement can be left blank. Of course, you cannot write your own name.

Once each participant has filled in the five blanks they have to exchange this information with five other people. They also have to note down the common names that were picked when they exchanged information with their five random colleagues.

After five minutes of 'mingling' and exchanging information, the participants can be asked to get back to their seats. Once they are back, they are given a chance to share the names that were most 'common' and those participants are to be applauded.

When /If some dare to show their hands, check if they are willing to share their thoughts without naming anybody. If someone is willing to share, reward the 'bravehearts' for their honesty.

For a 'change' to become a 'habit', it is said that the behaviour has to be repeated 36 times. Encourage the participants to find ways of recognising and verbally appreciating at least one person in a day for 36 days. If they are serious about being a 'coach', they will take your advise.

Now, it's time to look at the other aspect of being a 'mirror'. A 'mirror' also 'shows' areas for improvements. Undesirable creases in your outfit that show up in a mirror guide you to adjust the 'fit' of your clothing.

Similarly, a coach has to find a way to call the coachee's attention to an aspect that calls for improvement without criticizing the coachee. Criticism doesn't change people, respectful feedback does. Click the image below to understand 'respect' 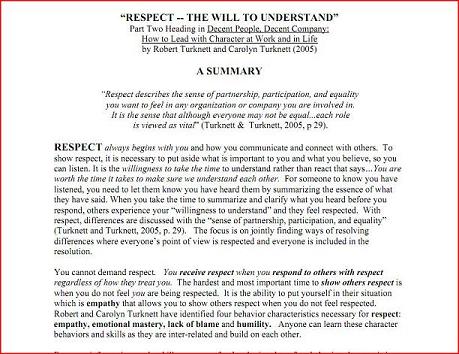 Giving 'respectful feedback' so that the coachee is encouraged to look at an aspect which requires improvement is a skill of asking pertinent questions.

Here's a game to practice this skill

In this game the participants stand in a circle with the facilitator in the centre. The facilitator has a bowl of slips with action words (like: running, panting, writing, typing, eating etc.) written on them.

A ball is randomly passed to a person by the facilitator. They have to then pass it to another random person. The facilitator then approaches the person with the ball and asks them to pick a slip and act out the action word.

This gives the opportunity for the person acting out to clarify their understanding of the word 'running' in the given context. It might lead them to clarify with the facilitator if they could have left their place to act the word out. This way, without being critical of the person's understanding of the word the questioner has pointed out an aspect the executer has to focus on.

The questioner cannot ask, "Why didn't you step out of your place to run?", because the response will always be a justification. Justifications don't lead to change or expansions of perspectives.

Suppose the person had left their place to act out 'running', then the questioner could ask a question like: 'Why did you decide on that pace?' So, essentially, the questioner has to ask a 'clarification' question at all times. Clarification questions helps the executer explain their thought process and understand their actions better.

The game continues until everyone in the circle has had an opportunity to act and question.

The facilitator will use 'action words' in the game because coaching is always about improving performance and the coach has to learn the skill of asking clarification questions as a form of feedback rather than criticising. Just like a mirror, the question shows an area for the executer to focus on.

As the coach will not tell you what you should improve, the coachee becomes more observant and reflective of his own performance and begins to identify aspects that he needs to improve.

Here's a coaching game to practice the skill of reflecting on your own performance with the focus of improving it the next time.

Coaching Game 3: The Card Game: Place a deck of cards in front of the participants. These cards are specially made for the occasion.

On one side are pictures of a performance - say of a game, an artistic performance, an academic performance etc. On the other side is a descriptor of something that was done well (take cues from the picture) in that performance.

Coaching game - Process:Get the group to get into pairs. Once the pairs are formed, they have to exchange their cards. The pair takes turns to play this game. The first participant - A - uses his partner's - B's - card to appreciate him in that particular performance.

In response, B verbally relates the appreciation to something in his worklife that he has done well. Next, he reflects on something that he could have done better.

For example if the card said 'excellent speech', A will say something like, 'Hey that was an excellent speech today, you had them spellbound!' B will respond with recalling and relating something that they actually did (not necessarily a speech) during the week which was noteworthy.

Then B will also reflect on something that they can improve on in that particular performance the next time.

The role is then reversed. The second partner - B - plays the role of a coach and the first one - A - plays the coachee. Of course, B will use the card belonging to A.